Identification and origin of Ginger

It´s native to tropical Asia and cultivated in other tropical and subtropical regions worldwide.

The rhizome of ginger contains:

Within the non-volatile compounds of ginger are the fenilalcanonas and fenilalcanonoles, which are the spicy or acrid principles of the drug and are known as gingerols and shogaols (components of oleoresins). Aliphatic aldehydes (nonanal and decanal), ketones (methyl heptenone), alcohols (2-heptanol, 2-nonanol), acetic acid esters of caprylic and chavicol.
Minerals such as Calcium, Sodium, Potassium, Iron, Phosphorus, Magnesium, Chlorine and Fluorine. High content in vitamin C, among other vitamins such as thiamine, riboflavin, niacin, pyridoxine and vitamins A and E.
Ginger also contains proteins such as threonine, proline and in some cases small amounts of tryptophan. Have been isolated from the aqueous extract of the rhizome the asparagine and the pipecoline.
>> continue reading about the Ginger health benefits 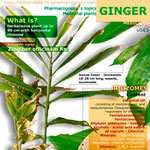