The white lily is a beautiful herbaceous plant with a scaly bulb, big and white. It has a bulbous underground stem and another aerial herbaceous stem coated with leaves, few leaves are widespread and others erect, lanceolate shaped, and sparsely undulating in the edges.

The white lily flowers are hermaphrodite, actinomorphic, and trimeric, located at the end of the herbaceous stalk, they have a perianth of six white petals, free from each other, provided with nectaries. The flowers are trumpet shaped. Its periodic blooming during several years, makes it an appropriate specie to grow in intensive. Androecium consists of six stamens and gynoecium of superior ovary (the other whorls are inserted into the receptacle below it: hypogynous flowers), tricarpelema and multi-ovulated. The fruit is a capsule of loculicidal dehiscence. Mature seeds are pale color.

They are bulbous plants that reach up to 1 meter in height, its stem is rigid and holds in its end from 8 to 12 trumpet-shaped flowers that are born from the same place. The petals of the white lily flowers are curved backwards. White Lilies give off an exquisite soft fragrance, especially at night, but not all varieties have scent. Its flower represents the candor, the majesty and purity because of its white color that is frequently seen in bridal bouquets. White Lilies have fascinated man since ancient times and in the temple of Solomon these flowers can be seen in the sculptures, also appear in medieval religious paintings.

The parts used in therapy are both fresh and dried bulbs and the extracted oil.

White Lily plant is native to Asia and North America. Later it spread to the Mediterranean. It is grown in many regions for its easy cultivation and the lasting of the cut flowers.

Its active ingredients have not been studied in detail.

Health benefits attributed to the plant of White Lily

The plant has anti-inflammatory, analgesic, diuretic and expectorant properties.

It is indicated for internal use in gynecological complaints (see warnings). It´s indicated in external use for treat ulcers, inflammations, boils, skin rashes, burns, wounds and eczema.

Due to the lack of hard data, it is recommended to use with caution and only administered topically.

Hydroglycolic extract (1:5) as an emollient.

Hot poultice, as resolvent and callus remover. You must collect a white lily bulb and after cleaning it with water, roast it on an ash, cut into slices and apply hot on whitlows, warts and boils.

The oil is applied to the treated area to cure ulcers, abscesses and bruises.

The bulbs must be boiled with water or milk and applied to any callus producing a rapid maturity. For this, the boiled bulb must be renewed every hour. It's foolproof for abscesses, boils and pimples.

With the petals of white lily flowers macerated in oil is prepared a new oil that is used as a soothing earaches and against mammary cracks.

Infusion. It is prepared with 3 g. of bulb in 100 mlof boiling water, have diuretic effects. 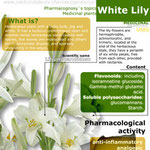