Identification and origin of Coriander

The Coriander or Cilantro is an annual herb of the family Apiaceae (called Umbelliferae). Have straight stems, compound leaves, white flowers and aromatic fruits, commonly used in the cuisine of Mediterranean, India, Latin America, China and Southeast Asia.

All parts of the plant are edible, but are generally used the fresh leaves and the dried seeds. In some countries it is known as Chinese or Japanese parsley.

The coriander is native to the Mediterranean region, eastern and central Europe, East Asia, North and South America.

The active ingredients of coriander are:

Coriander essential oil is a stimulant of gastric secretion. It has benefits as a carminative, eupeptic, estrogen and spasmolytic. It also has antibacterial and antifungal effects.

Due to its properties the coriander is indicated in hyposecretion, loss of appetite, gastrointestinal spasms, gastroenteritis, acute cystitis, urethritis, amenorrhea and osteoarthritis.

In Chinese medicine is used for appetite loss, in the terminal phase of chickenpox and measles, in hemorrhoids and rectal prolapse.

In Indian medicine is used in the treatment of nosebleeds, cough, hemorrhoids, edema, bladder disease, vomiting, dizziness and amoebic dysentery.

It should not be used during pregnancy, lactation, hyperestrogenism.

No side effects known during administration in therapeutic doses indicated.

The Coriander or Cilantro has a weak potential for sensitization, although it´s known cases of contact dermatitis from the fresh plant by exposure to light.

The pure essential oil is irritating. Orally in doses higher than those specified may cause convulsion.

It´s administered in powder form and other pharmaceutical preparations for internal use.

The coriander extract is prepared by percolating the drug; the weight of one part of the drug is mixed to ethanol 45% until get two times its weight of tincture.

The coriander infusion is prepared by pouring 150 ml of boiling water over two teaspoons of the drug, allow to stand for 15 minutes and strain. 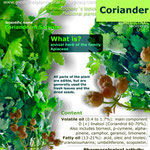